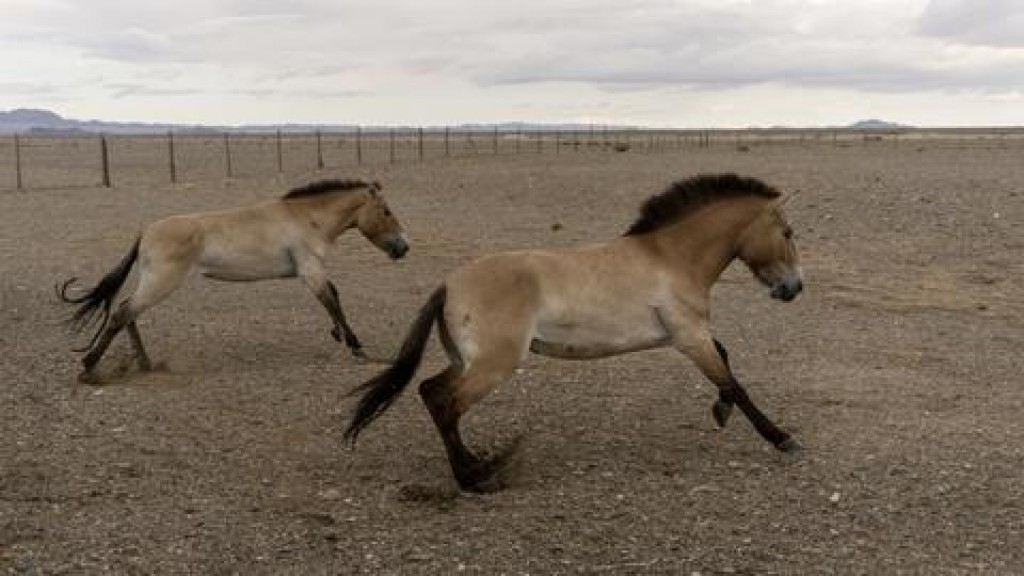 Four mares from the Prague Zoo have now been released into a wildlife reserve in an effort to boost the endangered species' chances of survival.

Four mares from the Prague Zoo have now been released into a wildlife reserve in an effort to boost the endangered species' chances of survival. The four round-bellied, short-legged, sandy-beige mares are set to join wild herds in Takhin Tal, where 220 Przewalski's horses now gallop free. Known as Przewalski's horses, the ancient species has narrowly avoided extinction thanks to breeding programs at zoos worldwide and is now gradually being re-introduced to a wildlife reserve in its original homeland. Prague Zoo, which has bred Przewalski's horses since 1932 and keeps the world genealogy book for the endangered species tracking all new births, launched a project to reintroduce the animals to Mongolia in 2011. Prague Zoo has released a total 31 Przewalski's horses into the Mongolian wilderness, with funding for the project provided by zoos from across the globe. Zoologists hope the four new mares from different zoos will improve the genetic mix of the Mongolian herd. New genetic research suggested that the stocky horses that inspired dreamy pre-historic cave paintings are not the world's last remaining wild horse as had been thought. The journal Science reported in February that, despite their pre-historic looks, Przewalski's horses were actually domesticated animals that escaped their human owner in the Botai area of northern Kazakhstan around 5,500 years ago.