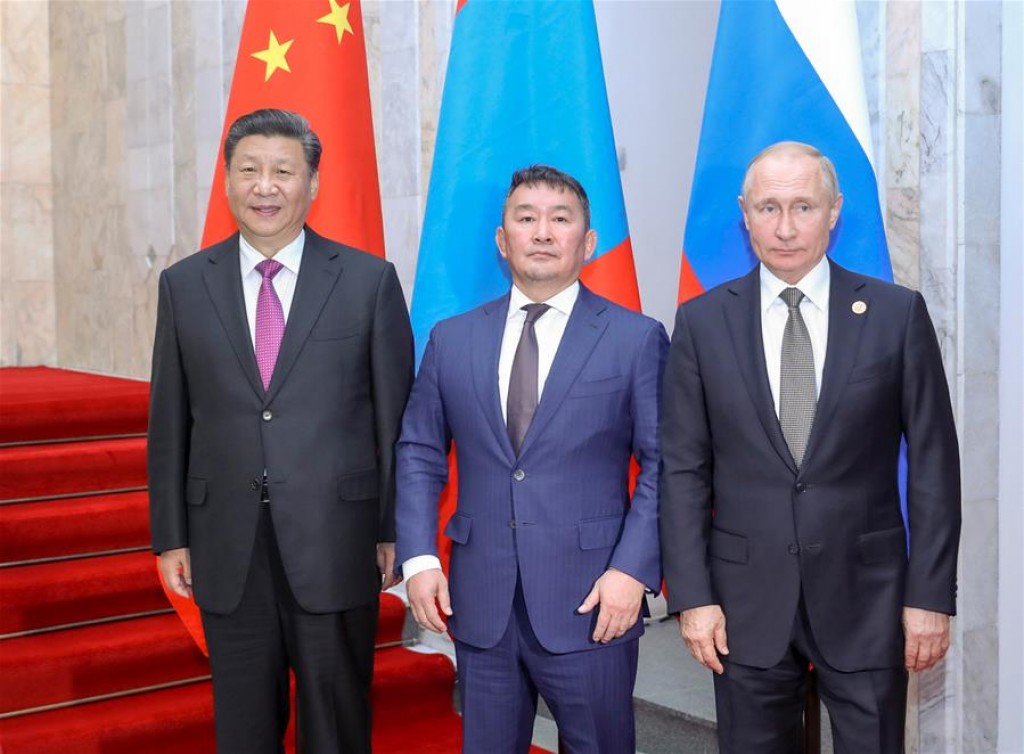 Presidents of Mongolia, China and Russia pledged to strengthen trilateral cooperation during their trilateral meeting.

Presidents of Mongolia, China and Russia pledged to strengthen trilateral cooperation during their trilateral meeting. The meeting, the fifth of its kind, among Mongolian President Battulga Khaltmaa, Chinese President Xi Jinping and Russian President Vladimir Putin was held on the sidelines of the 19th Shanghai Cooperation Organization (SCO) summit. The heads of state reviewed the achievements of trilateral cooperation and discussed the overall plan for the next phase. During the meeting, Mongolian president Battulga said it is Mongolia's unswerving policy to deepen the friendly cooperation with China and Russia, adding that his country is committed to pushing forward the trilateral cooperation and the construction of the Mongolia-China-Russia Economic Corridor. He called on the three sides to set up institutional arrangements so as to accelerate the construction of a network of cross-border highways, facilitate customs clearance, strengthen energy cooperation, and discuss the construction of regional power grids. Since the last gathering of the heads of state in China's eastern port city of Qingdao last year, the three sides have maintained close communication and cooperation, and the trilateral cooperation has gradually developed, said Xi Jinping. Noting that this year marks the 70th anniversary of the China-Russia and Mongolia-China diplomatic relations, Xi said China will hold celebrations with the two countries respectively. Against the backdrop of rising protectionism and unilateralism, the three countries need to firmly promote regional cooperation and achieve common development. They should focus on the alignment of the three countries' development strategies, promote comprehensive cooperation in all fields, and jointly release the positive signal of maintaining multilateralism and creating an open world economy, said Xi. Putin said Russia is committed to deepening its relations with China and Mongolia on the basis of mutual respect, equality and mutual benefit, and is ready to step up cooperation to promote the synergy between the Eurasian Economic Union, the China-proposed Belt, and Road Initiative, and Mongolia's Steppe Road program. He also called on the three parties to enhance inter-connectivity in transportation, expand trade, and bolster cooperation in energy and finance.