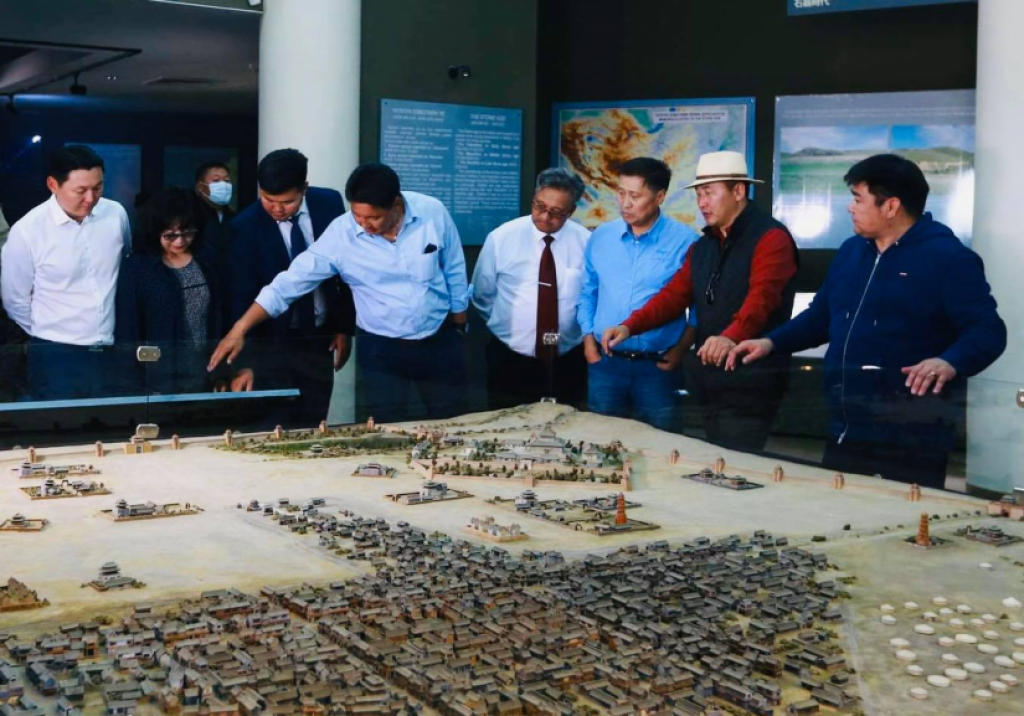 Between September 10 and 12, Prime Minister of Mongolia U.Khurelsukh paid a working trip to Arkhangai, Uvurkhangai, and Bulgan provinces, accompanied by some members of the parliament, Minister of Environment and Tourism D.Sarangerel, Minister of Culture S.Chuluun, Minister of Defense G.Saikhanbayar and other relevant officials. The action program of the Mongolian government for 2020-2024 reflects "To cherish national values and traditional heritage, educate citizens, develop cultural production and creative industries and to become a global center of nomadic civilization" and also targets to build a Central Asian Historical and Cultural Epicenter - research, promotion, and preservation center at the sites of the Orkhon-Tamir and Khanui-Khunui monuments. As part of the implementation of these goals, it is necessary to ensure cross-sectoral coordination and develop an effective plan to achieve results in a short time. With respect to this, Prime Minister Khurelsukh along with the corresponding working group visited the sites of invaluable cultural heritage in the region, such as ruins, tombs, monuments along the Orkhon-Tamir, Khanui-Khunui, and Tuul River in Arkhangai, Uvurkhangai, and Bulgan provinces. They also met with scholars and researchers, who are conducting archaeological studies and excavations, and listened to their opinions, and exchanged information. PM Khurelsukh said that the Mongolian government is now aiming to re-pursue policy to promote the development of history, culture, and arts, which has been left behind in the past three decades.  "The Ministry of Culture, which had been disbanded, has now already been reorganized, and activities are underway to build new museums, including the Museum of Chinggis Khaan, Museum of Nobility and Natural History Museum as well as a National Archaeology, Paleontology, and Ethnography museum, and laboratory” added the PM. “The time has come to focus on preservation and protection of invaluable heritage, popularize it to the world and develop new tourism products and services based on historical artifacts. Therefore, as ahead of the government, I have set up a working group made up of representatives in a wide range of areas. We will make great efforts to fight against any crimes and violations against cultural values and archaeological heritage and cultural heritage looters cannot escape the responsibility. After all, the victims of crimes against cultural heritage are the Mongolian people” said PM during his working trip.  The Prime Minister and officials accompanying him traveled more than 1,500 kilometers, visiting 17 historical sites belonging to different periods, such as Bilge Khan and General Kul Tigin Complex, Erdenezuu Monastery, ruins of Karakorum city and Kharakhorum Museum in Uvurkhangai provinces; Khar Balgas ruins, Zayiin Gegeen Khuree Monastery, Taikhar Chuluu Rock, a Hunnu (Xiongnu) Tomb Complexes and remains of Luut (Luncheng) city in Arkhangai aimag; and Khar Bukhyn balgas ruins, Chintolgoi balgas city ruins, and Prince Tsogt’s White House in Bulgan aimag and became acquainted with the progress of  some excavations underway by researchers and archaeologists.