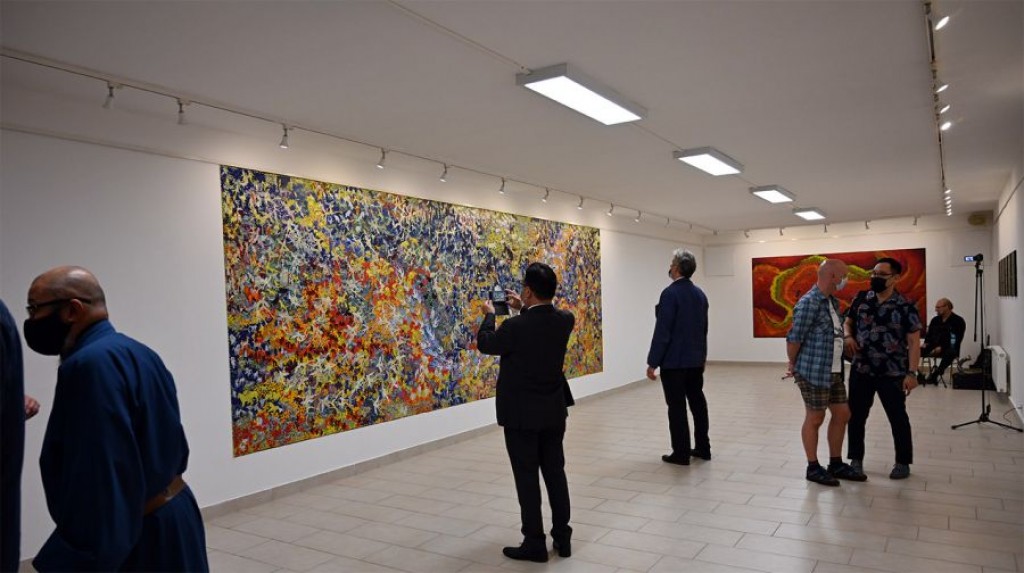 Mongolian artist Otgonbayar Ershuu, known with his artist name OTGO is displaying his solo exhibition ‘Infinite’ at Jozsefvaros gallery in Budapest, Hungary. In his speech at the opening of the exhibition on September 4, Ambassador of Mongolia to Hungary expressed his pleasure that the exhibition has successfully kicked off despite the delay of the activities planned in honor of the 70th anniversary of the establishment of diplomatic relations between the two countries. “I would like to note that your exhibition becomes an important event with its promotion of the beautiful country of Mongolia and its traditions and culture in this difficult time” the Ambassador said. Remarking that the painter creates his artworks using traditional painting techniques, the exhibition initiator and organizer, literary historian, translator D.Ganbold said “OTGO skillfully shows who he is and what he belongs through his very own art style. Also, he is not someone who follows mainstream trends, but an artist who has created special and unique Mongolian paintings and fully represents the uniqueness of the nation”. The exhibition will continue until September 28. OTGO exhibited his artworks in Japan, Sweden, France, the Netherlands, India, the Czech Republic, Switzerland, Moldova, Poland, Romania, Russia, United Arab Emirates, Singapore, Georgia, Germany and Mongolia. His works are in various museums, institutions and private collections, among others: – Mongolian National Art Gallery, Museum Ulaanbaatar, Mongolia – National Art Museum, Moldova – Mongolia Museum of Art in Ulaanbaatar, Mongolia – HSBC (Honkong & Shanghai Banking Corporation) – Seeheim Castle, Constance, Germany – Old Castle Baruth, Germany – Mongolian Embassy in Germany – MRK Gruppe, Dresden – Mьnchen, Germany and a very big artwork in the lobby of the Best Western Premier Tuushin Hotel in Ulaanbaatar, Mongolia.