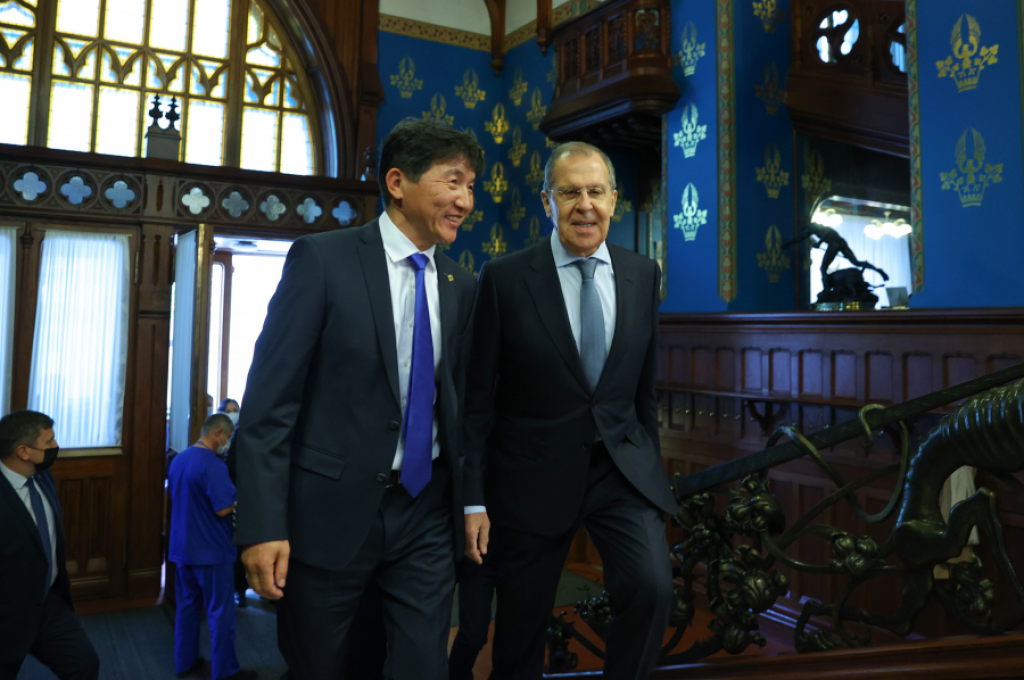 Minister of Foreign Affairs of Mongolia N.Enkhtaivan, who is on official visit to the Russian Federation, held an official talks with his Russian counterpart S.V.Lavrov on September 21.

During the talks, the Foreign Ministers shared views on a wide range of issues on bilateral ties, international and regional cooperation. Affirming that both sides give high significance to develop traditional and friendly ties between Mongolia and Russia sustainably, the Ministers expressed to collaborate actively for expanding and developing Mongolia-Russia Comprehensive Strategic Partnership relations in all spheres. Furthermore, they expressed delight at the Treaty on Friendly Relations and Comprehensive Strategic Partnership between Mongolia and the Russian Federation, which was signed by heads of the two countries on September 3, 2019, and ratified by legislative bodies of the two countries, enters into force from this day as the Ministers of Foreign Affairs exchanged the letter of ratification of the treaty. While considering it proper to celebrate the 100th diplomatic anniversary between Mongolia and Russia in a wider scope in 2021, the Ministers agreed to run a number of events in fields of politics, trade, economy, culture, education, science, and sports, developing a joint plan. They also discussed realizing reciprocal high-level visits in the coming year and reached a certain understanding. Moreover, matters related to the intensification of trade and economic cooperation and possibilities to announce 2021 as Mongolian-Russian Trade and Economic Cooperation Year have been touched during the talks. The two Ministers agreed to intensify the operation of the “Ulaanbaatar Railway” Mongolian-Russian Joint Stock Company in addition to resolving the required investment for the renovation of the basic structure of the railroad and basic components of the track in the near future. Moreover, the latter expressed a willingness to deepen collaboration in the energy sector in the future. Noting that the first phase of solving issues related to Russian immovable properties located on the territory of Mongolia has been completed successfully, the sides voiced to work towards launching talks on its next phases in the near future and finalizing it. Moreover, more efforts will be made further on moving forward implementation of a program on the establishment of the Mongolia-Russia-China Economic Corridor as well as accelerating works to formulate a feasibility study of the Power of Siberia-2 project. Additionally, the Ministers of Foreign Affairs exchanged views on mutually-interested international and regional issues alongside expressing interest to deepen cooperation within the framework of the UN and regional cooperation mechanisms. At the end of the talks, Foreign Minister of Mongolia N.Enkhtaivan congratulated to the side of Russia on taking intensive measures against the outbreak of COVID-19 infection, developing the Sputnik-V vaccine, and making significant contributions in protecting the health and saving lives of not only its population but also people of other countries.